Click below to hear the song “Green House” inspired by the day:


Mid March 2015 – Once again I had the priviledge of backpacking with two of my favorite people in the world; my son Miles, and my stepfather Erwin. These guys are really great traveling companions, always ready to go, well prepared and fine with whatever happens.

The destination was Bullet Canyon, a tributary of the San Juan in the Grand Gulch area of southern Utah. On the second day of the trip, while looking for a spring Erwin wanted to see, we stumbled on a place in the canyon wall where Puebloan cliff ruins exist. We climbed up and ate lunch in someone’s home from long ago. The canyon is named “Green House”, describing the coloring on the ruin walls. After a long hike back to camp, we played a little “Zen Ball” – a game of accuracy where you have to throw a ball to each other without moving your feet ( because you are surrounded by cactus). When night arrived it provided a clear sky perfect for star gazing. Erwin was able to use his binoculars to show us Jupiter’s moons and the Orion Nebula in Orion’s sword. This was an amazing day that made me think of what living outside must have been like, and how much of the world we miss by living inside.
Green House Trip Slideshow

First recording of my modular synth utilizing a modular sequencer, the structure is as follows:

tune 16 notes in a sequence
track 1 – at a slow rate – play them through various pedals to get long evolving and sustained tones
track 2 – change pedals slightly and overdub again at a random point
track 3 – change synth slightly and overdub again at a different higher pitch
track 4 – speed up the tempo and play synth through a ring modulator, playing with the available knobs on the synth and ring mod.

It’s pretty ambient and creepy and probably hard to listen all the way through – but seems to somehow evoke some imagery: ice, deserts, space, not sure what.

This piece of music, considered to be “one of the supreme artistic achievements of all time”, holds a special place with me. It provides an connection with my late father, Lorry E. Rytting, who loved the piece dearly. The first two movements remind me of my childhood home, and even as teenager when my Dad played this, I recognized it as something beyond this world. When he passed and his body left our home, we played it in it’s entirety, and I listened along my beloved family.

What I didn’t expect was a new connection with the 2-7 movements. With this performance, I was able to hear the music almost for the first time. The First soloist Michael Chipman was so involved in the performance, and he took me right there. I really was able to focus on his intensity and I was enthralled – surprising as I don’t usually connect with vocal performances. He set the stage for the section following his solo, where the chorus of voices and orchestra take journey through resolution after resolution, stacking up through a series of major and minor tonalities, completely unpredictable but somehow making perfect sense like Science or God. Certainly something bigger than me.

The rest of the performance kept me completely engaged, and I felt so lucky to be hearing these notes again, but this time with different perspective and more appreciation. It was a one of the most impactful performances i’ve seen in the past 2 years.

I Watched this documentary today about guitarist Pat Martino:

I had always heard stories of his amnesia and the struggle to learn how to become the player he was earlier in his life, this sheds quite a bit of light on the facts surrounding his journey. Not much footage of him playing, more about his condition and how it effected those close to him.

I had the good fortune of running into Kenji Aihara at the Guitar Czar store, who initially told me about this show, and then later my good friend Alisanne mentioned it to me a few days before. I’m grateful, because it’s rare for me to see my favorite players in Utah perform together.

In this context it was Steve Lyman ( drums ) and his quintet, performing with Russel Schmitd (piano), Kenji Aihara (guitar), Denson Angulo (bass), and David Halliday (sax). They opened with “Medowlark” a beautiful tune from the recording “Revolver” that was released by Steve. Revolver is a great album, and everyone who I talk to who has heard it agree with me.

The venue at the Gallivan Center is great, and sound support was refreshingly good at supporting the instruments rather than showing off the the sound gear. It was a smaller venue with limited seating, close and intimate with comfortable sound and chairs.

The players are amazing, and Steve shines in this setting, with players stating ideas in their solos that Steve quickly incorporates into his playing, starting a feedback loop between the two players that often reaches out and extends into the entire rhythm section. These players have such big ears and they really were pulling into each others playing with great camaraderie.

Russ’s solos are very phrase oriented, and he has a certain mastery over the form of the song to detach the rhythmic ideas presented in his phrases with the melodic. the rhythms often extend over the end of expected time forms (bar lines) into the next section with ease where they often extend upward in melody, to great effect when he eventually resolves the line. I particularly liked his solo in the finale tune “Au Privave” where he quoted other melodies from blues standards by weaving them in and out with great skill.

Kenji is nothing short of a master of the ear with amazing ability to change technique flawlessly whether comping or soloing. He was able to fade, scratch, hammer, pick, notes at will always with amazing technical ability. I love listening to Kenji as he is constantly listening for a new sound, while still retaining his identity . This time with a Fender telecaster and a Polytone amp. He at some points pulled from his guitar a sound reminding me of Bill Frisell, but his lines were always identifiable as Kenji.

Denson continues to progress, and every time I hear him, he is at a new level of playing. An incredible soloist on an instrument that is extremely difficult to play well, he and Steve have a dialog between them that blurs the lines separating the two instruments.

Steve is so fun to listen to. He is doing things on drums that I haven’t heard much of in this City, and he seems to be pulling from some of my favorite new drummers from NYC in a movement that steps out of the grid of playing right on top of the beat, to playing in front, and behind, and even in both places at the same time. He is always in touch with the soloists, is some cases I wonder if they could even escape him, as his is ear is always inviting a dialog to talk amongst the members of the rhythm section – rather than leaving the soloist remain autonomous.

Finally, with the amazing technique of David Halliday – this band rounds out as such a great sound, they all seemed to genuiely enjoy the time on the stage with each other, and the audience did too. I really enjoyed this concert and hope the “Excellence in the Community” series at the Galivan continues and is successful. 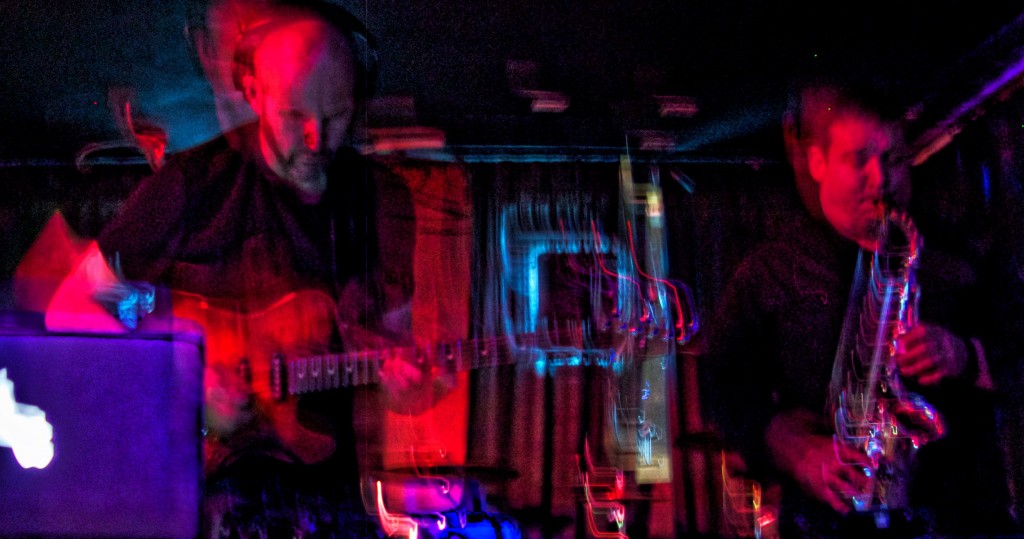 The first student of the Viudu School had their first lesson, as I embark on a long journey to try to give to others some of the realizations I’ve learned in my studies of music and practice. It’s been a long time since I’ve taught lessons and I have a completely new view on the value of the practice of music. I’m very excited about this opportunity, and hope I can develop it into a big part of my life work.

In other news, my great friend and collaborator Greg Nielsen and I performed under his moniker “Features Form” at bar downtown to open a 4 band show. It was the first time I’ve performed with a computer in addition to guitar. While we have a lot of organizing and restructuring to go, the listeners were receptive and we had a great time.